The cover of an Hermes Media 3 typewriter 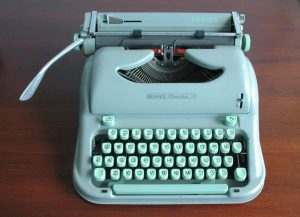 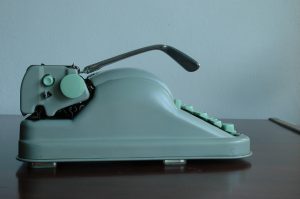 the Hermes Media 3 is a typewriter of high quality and it is sought for by collectors.
It has some remarkable details. The indicator for ribbon colour is made with four colour-anodised aluminium pinheads, riveted in the aluminium bonnet
It’s wave-form arrangement of the keys gives it a happy appearance 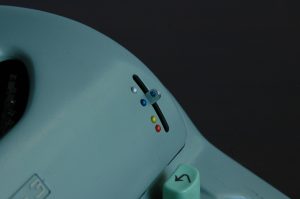 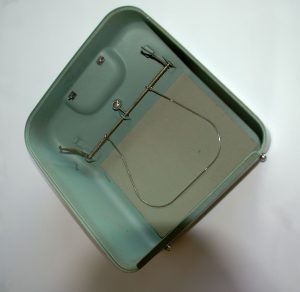 We are dealing with a thin wall aluminium stamping in which the handle is mounted .
The lid reaches under the machine in the back, the two  hooks catch the machine when the lid is folded over it.
The two hooks are opened by pushing a single central button.
On the inside there is a wire spring that can hold e.g.  sheets of paper and carbon black paper.
Two coil springs active the two hooks and the paper holder

The button is guided in an tube and it operates the two hooks simultaneously via a lever and a shaft. The hooks and the lever are brazed to the shaft.
The three bearings for the shaft are welded (?) to the aluminium case. 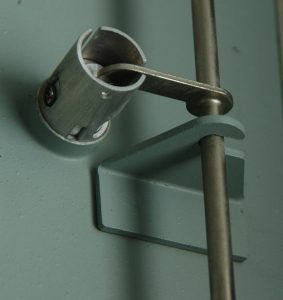 Similarly elaborate is the mounting of the handle to the casing.
The handle has two stubs that rotate in round holes in two small chrome stampings.
Each stamping has a round hole on one side and a square hole on the other.
The stamping is wider on the outside than it is on the inside. It slides through a slit in the casing
There is a chromed underlay-washer on the outside 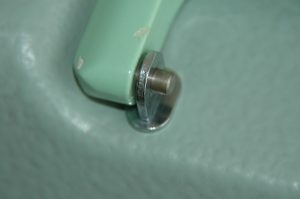 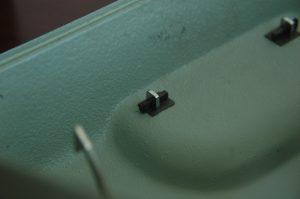 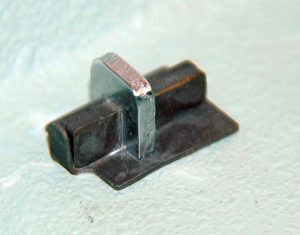 Compare this full metal design to the brilliant design in plastic of the cover of a Hermes Baby series 3b, in the photo here below.
There are a mere 6 different design parts to be produced and handled. There is little assembly effort required.
However, I admire the dedication, maybe even devotion, that has gone into the elaborate solution in metal. 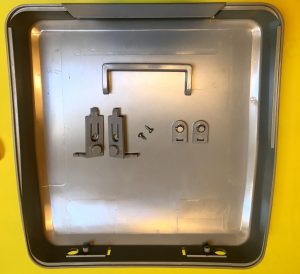 So, we take a look at the lid of an Hermes  Baby serie 3 a, outside and inside view 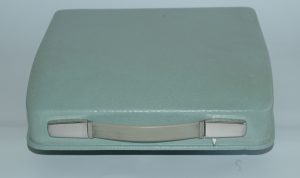 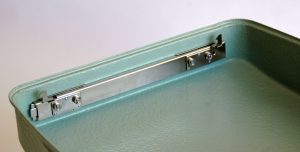 On the outside there is a single lever to translate the two hooks on the inside, and open the lid.
The lever can not be operated if the strap is pulled for carrying the typewriter.

Here below are all constituing parts of the mechanism, nothing special, but look at the part count and the effort required to assemble them all.

The strap is an assembly, where a piece of steel in hiding in the rubber.
The keyhole seerves to lock the latch when the strap is pulled. toatal part count: 6 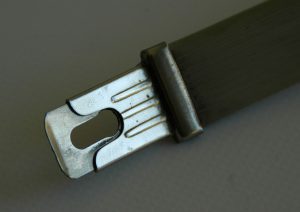 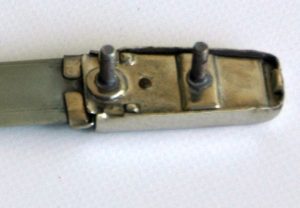 The operating lever is shown below, another 5 parts, welding and rivting. Hoping the weld studs are identical to the ones used on the other end of the strap 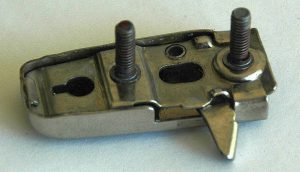 The internal parts consist of a guide rail in which the hookbar can translate. a coil spring hides between the rail and the bar.
The rail is positioned and mounted between steel plates and two nuts on both sides. Here we count 7 oparts of different design, 12 parts in total.

This a not a cheap design.
This a designed to make sure that everything works properly, now, and for generations to come.